The Japanese Chin is a independent, sensitive, intelligent breed that has some “cat like” tendencies.  This small dog likes to be up high and will climb to the tops of furniture or counters in order to look down on people and things.  The Japanese Chin also is a fastidious pet.  Cleaning and grooming itself.

This little toy-dog breed is great for apartment dwellers.  It does not need to roam and chase anything. This breed is not known for barking, so proximity to neighbors is not an issue.

It was originally bred as a companion dog for the Oriental aristocracy.  It looks like a royal dog with its exotic looks and a mane around its head and shoulders.

This little toy breed has a medium length silky coat, is good with other dogs and is affectionate with his family.  Due to its flat face you can expect snorts, sniffles, sneezes, and snoring.

The Japanese Chin is more like a cat than any other dog breed.  The Chin is stubborn, likes to climb and likes to be well groomed.

This breed may do better with a family with older children.  This is a very small dog and may not be able to handle the antics of a toddler who is still learning how to treat animals. It will be wary around new people and strangers.

This breed can be stubborn and difficult to housetrain but for those difficulties it makes up for in affection.  It loves its family and wants to be with them rather than be alone.  You will need to watch for separation anxiety which is common for this breed.  This breed is also good with other dogs. 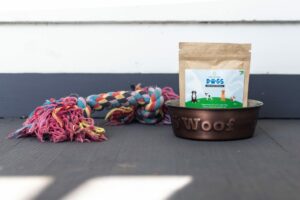 Superfoods for your SuperDog

Get Epi-Genius Dogs now and watch the positive results come forward in days.

While the Japanese Chin will spend time on his own grooming you will need to step in and occasionally help.  Brushing weekly and monthly bath are good practices.  This little dog likes to stay clean which actually is beneficial for you and cuts down on the time you must groom.  Their silky hair does not usually require cutting and with minimal brushing you should be able to keep it free from matting.

You will need to check the ears for wax build up and infections.  If the ears are red or have a bad odor that can indicate an ear infection.

Teeth should be brushed regularly to avoid cavities and bad breath.  Small dogs that don’t have a tendency to chew objects often need help getting the tartar off their teeth.  That is why you will need to help with the tooth brushing.

This breed is mainly a companion dog not a show dog for tricks or agility competitions.  The Japanese Chin responds to positive reinforcement.  It can at times be stubborn and house breaking can be difficult.

The Chin does not require a lot of exercise or a large area to play.  About 20 minutes of daily activity should keep your Chin in tip top shape.  If you take your Chin for a walk it should be a slow walk.  You may want to use a harness over a leash because of the Chin’s small size.  It is suggested, due to the Chin’s sometimes stubborn behavior to keep you Chin on a leash when out and about. They may decide not to respond to voice commands.

The Japanese Chin does not do well in the heat.  You will need to be extra cautious during the hot summer months or if you live in a warm year round climate.  This breed is also sensitive to anesthesia.

This breed hails from Asia and is found in both Chinese and Japanese history.  The Japanese Chin could be found in the Chinese or Japanese imperial courts.  The Chin’s were bred for royalty, to amuse and entertain.  They were companion dogs.  Ancient Chinese pottery has had pictures of dogs similar in looks to the Japanese Chin so this breed may be very old indeed.  Portuguese sailors introduced this breed to Western Europe in the 1600’s.  In 1977 the American Kennel Club recognized the Japanese Chin breed.

Costs for a puppy can run between $1500 to $2500.  This is an expensive breed to buy but the grooming costs are a little lower than some of the other toy breeds.

You can find rescue Japanese Chin’s to adopt or foster, so purchasing new is not always necessary.

The Japanese Chin is a small breed of dog with an interesting history. It is thought that they were originally bred by the Chinese and brought with them when they emigrated to Japan, where they were bred with smaller native dogs such as the Pekinese.

The Japanese Chin is a wonderful toy breed that is affectionate, loving, good with other dogs, mild mannered, dainty that will adjust well to apartment life.

The Japanese Chin a very "cat like" dog breed! Great for those with small spaces. #doggieDMVD

Get details as learn more about DMVD and options to treat our canine family members.